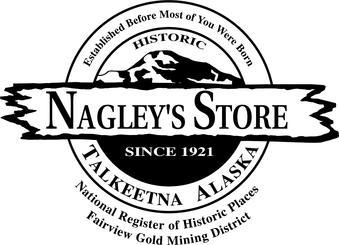 Horace Nagley opened his first store at Susitna Station in the early 1900’s. From there he supplied many miners and trappers heading in the interior via the Susitna River. As the Upper Susitna Region became more settled with the completion of the Alaska Railroad, Nagley opened his second store in Talkeetna.

The original log building was located at the end of Main Street near the river. The store was the focal point of activity in the town serving as the Post Office and District Territorial Headquarters.

Nagley ‘grubstaked’ many individuals seeking their fortunes in gold. In the process, he ended up owning many gold claims; presumably because of miners unable to pay back the ‘loans’.

Nagley sold his business in the mid 1940’s to Barrett and Kennedy who operated the store as the B&K Trading Post. They moved the original building down Main Street to its present location. Barrett and Kennedy sold the business in the mid 1980's. In recognition of Nagley’s contribution to the community the store name was changed back to its original version.

During the early 1900’s builders used man ‘natural’ materials in the construction of buildings. The original Nagley’s store was constructed of logs acquired in the local area. Building insulation was usually material which was easy to acquire. In the case of Nagley’s Store, builders used the sawdust left over from sawing of the logs and milling of timber. When that supply was exhausted, moss was gathered and used as insulation.

The obvious problem was that this material was flammable – creating a serious fire threat. When Nagley’s caught fire on New Year’s Day 1997, firefighters had a very difficult time extinguishing the smoldering sawdust. The fire would often re-ignite within the walls of the store.

Lookouts were posted across the street at the Fairview Inn throughout several nights to watch for fire. It took the heroic efforts of the Talkeetna Volunteer Fire Department the better part of three days and over 50000 gallons of water to put the fire finally out. With the help of the community, the store was rebuilt and back in business in less than four months. 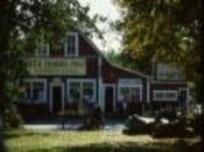